When it all started in a small unit based near Southampton docks, we’re confident very few people would’ve expected SEP to turn out the way it has!

Initially, the plan was purely and simply gaskets and basic machining. Rubber Moulding, Inflatable Seals, Studbolts & complex Machined Components weren’t even on the minds of those involved at the time.

Fast forward 39 hugely successful years and 2 premises moves later, we think anybody ever associated with SEP, or has ever dealt with SEP, will agree that although the company is virtually unrecognisable nowadays, it is a company still based on the core values originally set way back in 1976.

Next year is the year that will see SEP turn 40! An incredibly proud time for all associated with SEP, those still here and those that have moved on but helped lay the foundations the current team are helping develop and enhance today.

Throughout next year, we will be hoping to post many old photos and flashbacks as part of our #SEP40 feature. You will be able to find these on our website, social channels using the hashtag above as well as in newsletters published throughout next year.

There will also be a competition with a special prize to be won however we won’t be releasing any more details on this until the New Year so keep checking www.specialisedengineering.co.uk. We will also be sending out an email with all of the information so you wont miss out, keep your eyes peeled!

We’ll see you all in 2016 for what will be a special year for Specialised Engineering Products!

The original SEP logo from 1976 lasted until 2013/2014 when the company underwent a re-brand procedure. 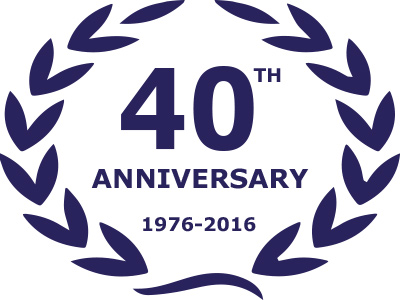 The SEP 40th Anniversary crest will be utilised across all digital communications and stationary throughout 2016.